The Monte Hotel is a rather different to Gerna Manor, the derelict building I wrote about in part 1. It’s a lot bigger, far more accessible and has an interesting story behind its rise and fall.

Perched high above the Lagoa das Sete Cidades, you can understand the attraction of building a hotel here. It’s stunning views are a tourist attraction even today, and the Monte was a luxurious place. It had 88 rooms, two restaurants, a bank, a hairdresser – even a nightclub.

But high end tourism can’t be sustained by views alone. In the end, its location worked against it. It’s difficult to get to along winding narrow roads and the beautiful lake is often shrouded in fog. In addition, the Monte was built in the late eighties, years before the Azores had any kind of major tourism. So the hotel closed its doors only two years after it opened. 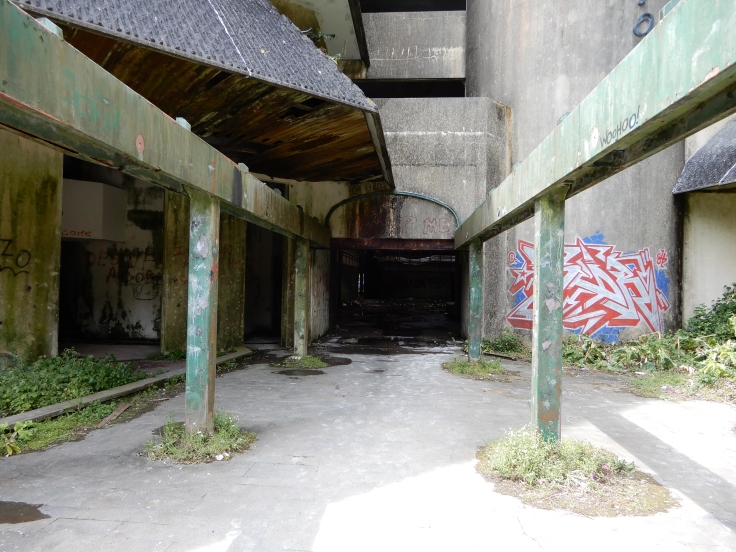 But it wasn’t re-purposed or pulled down. The story goes that for nine years or so it was guarded and fenced off. Then the guards stopped being paid so they stopped well, guarding. The fences disappeared and nature returned.

You can now wander freely about the majority of the vast building, stripped of any internal decor except some sodden carpets. The concrete shell is decorated by graffiti and mould, but the level to which you can explore is disconcerting. It’s the closest I’ve ever been to doing some real urban exploring.

Its balconies and rooftop make an excellent places to get an unspoiled view of the lake. With parking for a viewpoint opposite, it’s also easy to access if you can find a parking space.

I’ll admit I had a very eerie feeling walking about the place, not just because of my natural feeling that i was trespassing. Because of it’s recent age, it’s almost post-apocalyptic – as if I’d stumbled into part of the ‘Fallout’ series of video games. You can just about visualise the guests and staff sleeping, eating and living in luxury (there are some ‘before’ photos online which are fascinating and very eighties).

It provided some serious brain food and I have a nice short story (or possibly even film script) brewing about the place.

If you’re going anywhere around the lakes and have an interest in such things, I’d advise a careful visit even if you just stand outside and look. Has anyone else explored the Monte hotel? Or somewhere similar?

2 thoughts on “Abandoned Buildings in the Azores – Part 2”