If you’re a regular reader, you’ll know I’m rather interested in history and cemeteries. So the ‘Roman Dead’ exhibition at ‘The Museum of London Docklands’ was definitely worth a visit. And as an added bonus it was free. 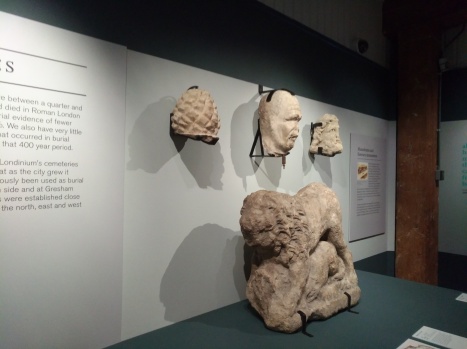 The exhibition showcases finds from excavations around London, with the focus being on a stunning sarcophagus found in Southwark.

The great thing about cities is that they’re built upon, well cities. Layers of history lie just under the surface. In somewhere like London, building work is always going on so archeologists are frequently called in to investigate newly dug areas.

The burials they’ve found around London date from between the 1st and 5th centuries. London became part of the Roman empire and was, therefore, home to many people from around the vast area it covered. People of African, Greek and Germanic origin were all buried beneath London soil. 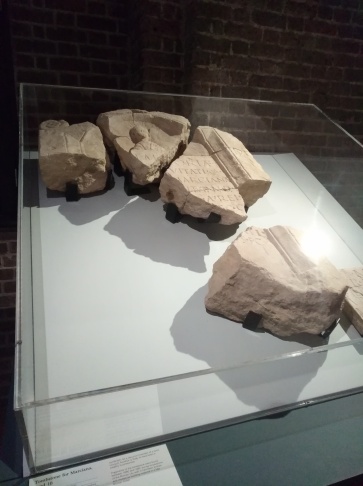 Roman burial practices were varied. Some people were buried, others were cremated and their remains placed in urns. Grave goods were common in both cases.

The Romans were reverential of their dead, but also fearful of vengeful spirits. Roman law insisted that all burials were made outside of town or city boundaries. Whether it was simply about their fear of ghosts, or they understood the need to keep decomposition away from the living is another story.

The most amazing find of recent years is a full stone sarcophagus. Inside was found the body of a woman and a baby, but they’re not sure if they were related. The sarcophagus was found to have been disturbed and the lid partially open so the two bodies may not have been buried together originally. But it’s still stunning to see this piece of ancient history and craftsmanship pretty much fully intact.

Some burials also revealed more violent causes of death, including bodies found with head wounds and shackles around their wrists – that certainly sparks the imagination!

This is why I love history revealed through archeology. Towns and cities have been occupied for so many years, and so many lives have been lived on the same places we now call home. All those stories waiting to be uncovered. From historical fiction to ghosts or murder mysteries, if you stuck for inspiration go to a museum. I guarantee you’ll find something, even the smallest artifact, to get those cogs in your mind working.

And finally, the addition to my notebooks collection is shown above. It has the added bonus of being a handy reference for Roman numerals!