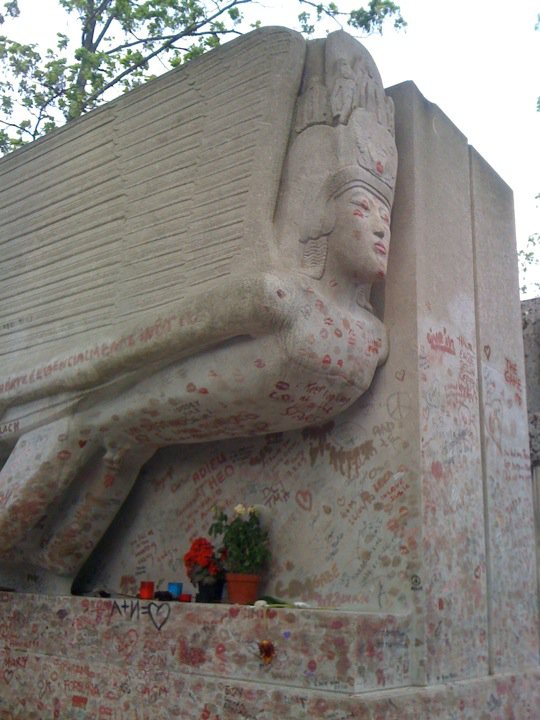 (I originally visited Paris in 2013 and put up a post about Oscar Wilde’s tomb. Recently I found some more literary-related photos from my trip and thought I’d add them in with a bit more content – enjoy!)

Pere Lachaise Cemetery was built in 1804 and is the largest cemetery in Paris. It’s now the final resting place of a number of the great and good such as Moliere and Jean De Fontaine.

One of the most visited graves has to be that of Oscar Wilde. He was buried, or rather re-buried, here in 1909. He’d originally been buried in Cimetière de Bagneux in 1900 but was disinterred and reburied nine years later. His tomb was designed by Sir Robert Epstein and is a fitting tribute to the daring and flamboyant writer.

Originally the statue had it’s “meat and two veg” in situ (albeit censored by the authorities via a gold leaf) but these have since gone awol.

The “kissing” tributes appear to have started in the 1990s and were soon joined by hearts and messages in lipstick. However repeated cleaning was wearing the stone away, so the tomb is no protected by plastic.

This, I understand, has also been duly covered with lipstick but without the damage to the stonework.

Two titans of French literature have their final resting place in the famous Pantheon. The site of the Pantheon had been home to monuments since Roman times. The building that occupies the site now, was completed in 1790 and then, following the French Revolution, became a sort of temple of the people, with famous writers such as Voltaire interred there, along with Emilie Zola and Louis Braille.

I only managed to get this pic of Hugo and Dumas, which I blame on my now-antiquey phone camera. Still there are worse people to photograph. Hugo was responsible for the classics “Les Miserables” and “The Hunchback of Notre Dame”, whilst Dumas wrote the towering “Count of Monte Cristo” and “The Three Musketeers”. Their works remain the dominant representations of French fiction and France itself. And they did a pretty good job at boosting the stereotypical French reputation for being a bit, well, “lusty”.

Here’s a bonus of the tombs of Marie and Pierre Curie, also found in the Pantheon. And yes, they’re both encased in lead coffins due to the radioactivity of their bodies. Even their papers are kept in lead lined boxes.

And last but not least, the garden forest found a the Bibliotheque Francois-Mitterrand. This is a forest within a library, or at least within its courtyard which is certainly an extraordinary sight. It’s over 1 hectare and can be seen from many of the libraries reading rooms. It’s an amazing site although if you’re me, you can’t help but think there’s something a bit odd about having the live trees watching over their dead relatives – but maybe that’s just me!

So what do you think? What literary spaces in Paris do you think are worth a visit? Please share in the comments!

Find out more about my books