If you’re familiar with my blog you know I like to find literary connections wherever I go (or at least an inspiring place I can share with you guys). My trip to Canada was no exception and came with an additional perk. Douglas Coupland is a famous Canadian author and one of my favourite writers. And he’s produced a number of visual artwork pieces, found dotted around Vancouver and Toronto.

This is the Digital Orca, a pixellated sculpture of the great sea creature, seemingly leaping from the Vancouver waterfront behind. Its digitized nature is well in keeping with Coupland’s fascination with technology depicted in a number of his books including my favourite, “Microserfs”.

Unfortunately, I had to take these photos at a distance, because (in an ironic twist given Coupland’s interest in corporations and their impact on humans), a corporate function was going on the day we were in Vancouver and this area was roped off. Hrumph.

However, there are other pieces of his work around Vancouver, and I was fortunate enough to encounter one of his most recent installations at the Vancouver Aquarium in Stanley Park.

“Vortex” is a challenging piece of work about the environment, not an unsurprising focus for an aquarium. Part of it looks specifically at plastic in our oceans, but also at the wider threat of climate change and our position in history.

The work consists of a large pool of water in the centre of a darkened space, filled with plastic rubbish and a lifeboat

On the walls are separate tanks showing plastic waste and sea creatures, along with a short essay from Coupland about the work. 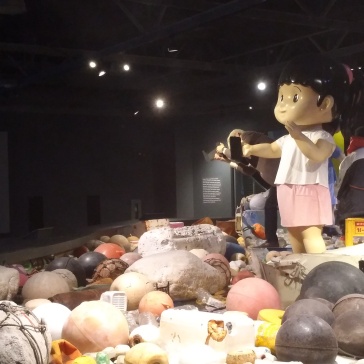 Inside the lifeboat are a group of figures each representing a period of time;

“Andy Warhol taking Polaroid photos of the plastic in the seascape presents the past…the woman in the life preserver represents the present…an African migrant from an overcrowded boat…fleeing the economic and ecological hardships of her home country…but then we have a promising future! Here it’s represented by Plastic Boy and Plastic Girl…documenting their reality with the intention of changing it.”

The work is made up almost solely of reclaimed material, from the plastic in the seascape and tanks to seagulls and boat itself;

“…a Japanese fishing boat lost in the 2011 Tohoku earthquake. It was found beached in Gwaii Haanas National Park Reserve and Haida Heritage Site.”

The work shows Coupland’s fondness for pop culture in Andy Warhol and the Plastic Boy and Girl, but it doesn’t obscure the seriousness of the message which can be described as quite literally “We’re all in the same boat”. 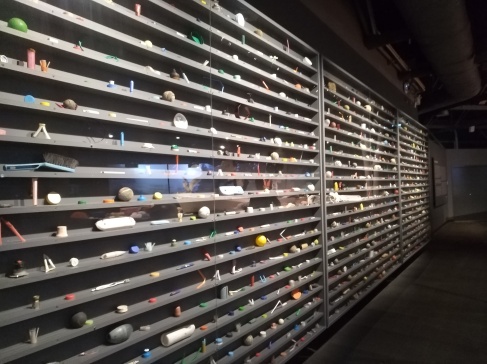 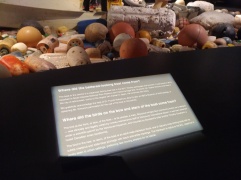 And that may be a little on the nose, but it’s completely true. Climate change will have an impact on everyone, no matter where we live or what generation we’re from. It was also interesting to see that Coupland has some hope for the future, as I’d felt his most recent books were increasingly cynical of our modern world.

Have you seen Coupland’s artwork before, or read any of his books? What did you think? Let me know in the comments.

An Oasis of Creativity – The Barbara Hepworth Museum and Sculpture Garden

4 thoughts on “The Art of the Author – Douglas Coupland’s Visual Art, Vancouver”